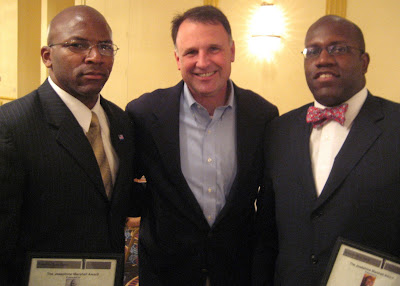 The Award recognizes and honors the achievements and contributions of individuals within Congressional Districts that have demonstrated significant contributions to the Democratic Black Caucus and the Democratic Party of Virginia concomitantly developing and advancing relevant issues with references to minorities within the political process.

Typically one recipient from each Congressional District receives the Award; however, the 8th District felt that the 2009 honorees both deserved the Award. Terron and John received the Award in a presentation ceremony at the Democratic Black Caucus Juneteenth Dinner Saturday, June 13th, 2009 in Williamsburg, VA at th Crowne Plaza Hotel at Fort Magruder.